Monday - February 6, 2023
On Lawrence
Your One Stop Site For Everything Lawrence, Kansas
Home » Reviews » Movie Reviews » Feathering the Nest 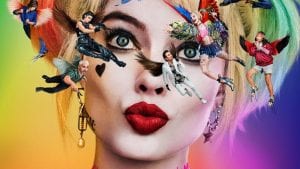 I like it when something cool comes from something damaged and terrible. For example, the DC Extended Universe. Initially, they were not off to a great start. They had a Superman who was mopey, grumpy, and seemed to save people not because he was compelled to help, but because he was afraid of being written up by his manager. They had a Batman who was not so much obsessed with punishing crime as he was having a psychotic break.*

They also had a Harley Quinn trapped in a movie that didn’t deserve her. Perhaps you recall 2016’s Suicide Squad. It was a damn good concept for a movie, with the idea that a group of supervillains is forced to work together on covert missions too unsavory for the Justice League. All you need to do is find a group of characters with big personalities, let them bounce off each other for a bit, allow them to achieve a kind of victory, and develop a deranged camaraderie.

You’d think the script would write itself, right? Nope! Writer/director David Ayer had a scant six weeks to write the first and only draft before beginning production.** Among the bright spots of the famously troubled film was Margot Robbie’s cuckoo banana pants Harley Quinn. It almost felt like every time Suicide Squad really started to suck, Robbie would save the film through the force of her talent and charisma.

Robbie’s casting as Harley is one of those perfect fusions of role and performer. Much like Hugh Jackman as Wolverine or Chris Evans as Captain America, it’s tough to imagine anybody else playing her. A firecracker performance assured audiences that Harley would be back. She’s back in Birds of Prey (And the Fantabulous Emancipation of One Harley Quinn), and it pleases me to tell you that not only is it miles better than Suicide Squad, but it’s also a hell of a lot of fun in its own right.

We can all agree that breakups suck, and we all have exes that are problematic. Harley Quinn (Margot Robbie) has us all beat. You see, her ex is The Joker, a psychopathic clown with a knack for mass murder and theatricality. She’s decided that the Clown Prince of Crime ain’t what you’d call a stable domestic partner, and it’s time for her to strike out on her own. 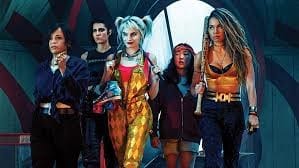 All Harley wants at this point is a) to not be brutally murdered, b) set herself up in a business of some kind, and c) enjoy a truly delicious breakfast sandwich.*** That’s good…except for the slightest complication. As a walking natural disaster, Harley’s beloved Mr. J enjoyed total immunity from the criminal underworld. Harley did, too, and now that the breakup has happened, her immunity is history.

Quite a few people are looking for payback, and the most immediate of her concerns is one Roman Sionis (Ewan McGregor). He’s a trust fund guy with designs on controlling all of Gotham City’s criminal element, and he has an unsavory habit of having people’s faces cut off. His henchman Zsazs (Chris Messina) is only too happy to help with said face-cutting. 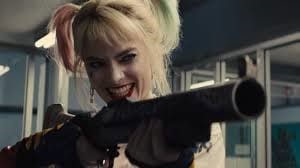 Birds of Prey works for a number of reasons, and the confident and stylish direction of Cathy Yan is one of the biggest. Unlike early DC films, she’s made a movie that pops with color and energy. Her action sequences are clear, clean, and totally lacking in the maddening choppiness that used to be a standard feature.**** Admittedly, there are a few moments where the hyperactive pacing comes to a wheezing halt, and the film absolutely bludgeons us with needle drops. I can live with that, as Yan’s talent behind the camera outweighs her missteps.

The same goes for the screenplay by Christina Hodson. She’s developing a reputation as a cinematic superhero of sorts, as her screenplay for Bumblebee helped to resurrect the misbegotten Transformers franchise. In theory, her first act structure is a good idea. In practice, it’s clunky, as the narrative constantly loops back and forth upon itself, mirroring the fragmented brain of Harleen Quinzel. I should also mention that The Joker is discussed a lot, yet the Harlequin of Hate only shows up in an animated prologue. However, once everything is set up properly, Hodson’s script takes off like a rocket. Like Deadpool, the film earns its hard R rating with a plethora of f-bombs, violence, and a motormouthed protagonist who loves shoving a middle finger against the fourth wall. Unlike Deadpool, the jokes aren’t quite as dependent on pop-cultural references. There’s a real sense of celebration and positivity, reflected through a cracked lens. 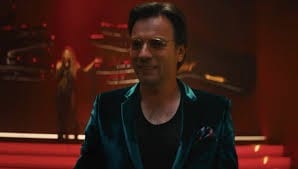 As Harley, Margot Robbie is the engine that powers the film. Whether she’s smacking around assassins with a baseball bat, giving snuggles to an alarming hyena, or acting as a weird-as-hell mentor, Robbie is down for anything with. A character like this could get annoying fast, and she knows just when to crank up her energy or dial it down. A movie like this needs an antagonist who can keep up with the protagonist, and Ewan McGregor is up to the challenge. He’s having a blast strutting around in velvet suits yelling at underlings, and he makes for an entertaining villain.

The rest of the cast keeps up well, but considering the movie zips along at a brisk hour and 49 minutes, some characters are a little lost in the shuffle. We never learn too much about Jurnee Smollett-Bell’s Black Canary, but she’s such a witty and perceptive performance that she’s able to make her underwritten role pop. I also loved the contrast between the manic Harley and Mary Elizabeth Winstead’s deadpan Huntress. She’s a little socially awkward, a little sarcastic, and Winstead effectively sells the desire for a killing machine to have friends to hang out and eat tacos with.

The MCU continues to chug along for now, and it does so due to a strong producer at the helm. The DC films never had that, which seems to have been an accidental blessing. Instead, the studio seems to just throw money at filmmakers and pray that things work out. It has, as Wonder Woman calmed down the skeptics and both Aquaman and Shazam! proved to be stabilizing influences. Birds of Prey is like getting smashed in the face with a baseball bat of fun, and its confident madness proves that when DC takes chances, the sky is the limit.

*Though I’m not inclined to blame Ben Affleck for the Dark Knight’s poor showing, and I view his Batman as possibly the greatest missed opportunity of the DC movies. Let’s take a moment and pour one out for the dearly departed Batfleck.

**That’ because Warner Brothers had already locked in the release date, and they weren’t willing to change it. Apparently, it didn’t matter since it made $745 million globally.

****Exhibit A would be The Bourne Supremacy’s apartment fight scene. I love that flick, but by watching its nausea-induced sequence, you’d never know that Matt Damon trained heavily in Jeet Kune Do, the martial art developed by Bruce Lee.

Tim Brennan
Tim has been alarmingly enthusiastic about movies ever since childhood. He grew up in Boulder and, foolishly, left Colorado to study Communications in Washington State. Making matters worse, he moved to Connecticut after meeting his too-good-for-him wife. Drawn by the Rockies and a mild climate, he triumphantly returned and settled down back in Boulder County. He's written numerous screenplays, loves hiking, and embarrassed himself in front of Samuel L. Jackson. True story.
Tagged: Birds of PreyMovie ReviewReview
OnLawrence.com is a directory and information guide for Lawrence, Kansas.
Discover the best of Lawrence shopping, restaurants, night life, breweries, events, business, outdoors, fun, local life, real estate, transportation, jobs, and schools.
Looking for what to do in Lawrence? OnLawrence.com has columnists, and bloggers to keep you up to date on the best of Lawrence, Kansas.