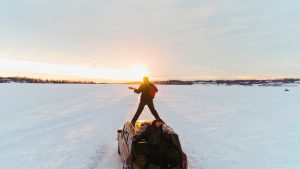 As you read this, somebody is working a soulless customer service job. They’re getting screamed at by a customer with an almost sociopathic lack of empathy. They’re trying their best to help while getting paid a shamefully low wage. They have a head full of chaos, but there’s a part of them that the disposable job can’t touch. That’s the part that dreams. That’s the part that creates art.

There are untold numbers of people with frustrated dreams. A budding rapper who puts their beats aside for a stable job in city government. A wannabe singer who croons in the car between shifts as a claims adjuster. Sure, there are those that want a career in the arts, and the thing that’s holding them back is a lack of talent.

But you know what’s worse than that? It’s when a legitimate creative gives in to the wrong people. Walk into a bookstore or head over to Netflix. Every filmmaker, writer, musician, and artsy-fartsy type had at least one individual in their life who said variations of the following to them:

Are the people that say these things to creatives terrible? In most cases, I don’t think so. In most cases, they mean well. A person can mean well and still be harmful. The flip side of that is that when one person believes in your talent, they’re rocket fuel. The new film Sold Out understands that. It’s a debut feature, and despite being a little clunky, it has something intelligent and perceptive to say regarding who creatives surround themselves with. 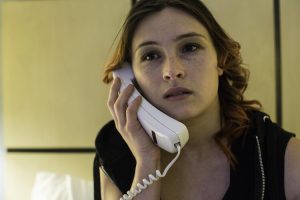 “It’s fine.” That’s what John (Sam Bardwell) hears his wife Lauren (Christine Weber) say about his music at a marriage counseling session. It’s not what she says but how she says it. The tone is a kind of weary dismissiveness, an “I’m so over this” attitude. All of the time John spent practicing, the time writing songs, the time spent playing to massive crowds of as many as five — none of it matters to Lauren. She wants John to focus on his job as a construction worker. To grow up.*

Luckily for John and luckily for us as viewers, Kat (Kelsey McMahon) comes into his life. She’s a freelance talent scout and she’s good at her job. So much so that a local band she’s guiding has a sold-out show, and the right people are there to see them. It looks like their rocket is pulling into the stratosphere, and it’s that moment where Kat takes her leave.

What’s next for Kat? John. He overhears her at a bar talking to crusty bartender Malone (Bruce Bohne). He takes a chance and gives her a demo CD. The good news is, John doesn’t suck! John’s music has a little Bruce Springsteen, a little John Prine, and a lot of himself. The better news is that Kat sees potential in him. Real potential.

Kat gives John an offer. She’ll mentor him, take him on the road, help him become the musician he always dreamed he could be. John will have to leave his job in construction, his increasingly chilly marriage, and his ridiculously cute daughter Millie (Naomie Bardwell). Along with helping John, Kat will have to come to terms with her feelings for him and the past she’s so successfully run from. 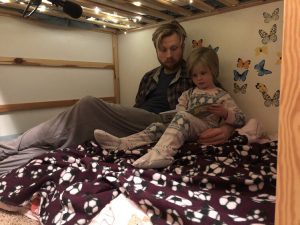 Sold Out is the first film by director Tim Dahlseid, and here’s the thing about that. Debut features are usually a little clunky. That’s to be expected, and Sold Out has a few moments of wonky editing and jerky pacing. But that’s a minor criticism considering that Dahlseid does two things very well. The first is that he knows how to make a good-looking film with a modest budget. Concert shots pulse with energy. A sequence shot on a frozen lake is gorgeous. Secondly, Dahlseid knows that character is key in a film like this, and he never allows the characters to be steamrolled by the plot. He pumps the brakes, letting us just hang out. Does a moment where John sings “Amazing Grace” with Kat’s alcoholic father advance the plot? Not really, and it doesn’t need to. That moment gives us a window into how these people behave.

That attention to character is also a key feature of writer Susan Brightbill’s script. She does something very clever and initially presents her characters as tropes — the sad-sack almost artist or the tough as nails manager. Then she peels the layers of the characters back, showing their strengths, foibles, and complexities. For example, when Lauren is first introduced, she’s portrayed as a killjoy. Subsequent scenes humanize her, and that care toward supporting characters makes the main characters and plot that much stronger. Additionally, Brightbill shows us that the process of creation…well, sucks. It’s not like the scene in the not very good Bohemian Rhapsody where Queen creates their biggest hit and makes it look easy. Sam noodles on his guitar, writes and re-writes, and sweats blood. Creation is hard. It takes time. We see all of that, and the time spent on the genesis of a song gives the eventual performance more of a satisfying payoff. 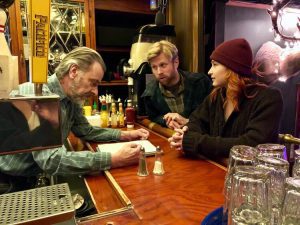 When you watch an independent film, there can be a huge roll of the dice regarding the quality of the acting. Sometimes the best you can hope for is that the actors don’t look directly into the camera. The majority of the cast here deliver performances that feel real and lived-in. I liked Kelsey McMahon as Kat. She uses her leather jacket, combat boots, and breezy confidence as a key to get her into (and out of) any situation. She also uses it as armor, and the moments when the armor drops and McMahon shows Kat’s vulnerability hit hard. She’s got good chemistry with Sam Bardwell. His John is a genuinely good guy and great dad who got into a less than ideal marriage, and Bardwell balances the pain he feels from the lack of support with his tangible love for music.

As you read this, somebody desperately wants to create, to make something. Nobody ever said the act of creation was easy, but that person might have an even tougher burden due to the people around them. Luckily, there’s hope. If you look at the movie poster for Sold Out, the tagline reads, “All it takes is one person to believe in you.” That’s a cliche that’s been around forever. It also happens to be true.

*For a certain kind of person, the terms “grow up” and “give up” are interchangeable.

Tim Brennan
Tim has been alarmingly enthusiastic about movies ever since childhood. He grew up in Boulder and, foolishly, left Colorado to study Communications in Washington State. Making matters worse, he moved to Connecticut after meeting his too-good-for-him wife. Drawn by the Rockies and a mild climate, he triumphantly returned and settled down back in Boulder County. He's written numerous screenplays, loves hiking, and embarrassed himself in front of Samuel L. Jackson. True story.
Tagged:
OnLawrence.com is a directory and information guide for Lawrence, Kansas.
Discover the best of Lawrence shopping, restaurants, night life, breweries, events, business, outdoors, fun, local life, real estate, transportation, jobs, and schools.
Looking for what to do in Lawrence? OnLawrence.com has columnists, and bloggers to keep you up to date on the best of Lawrence, Kansas.